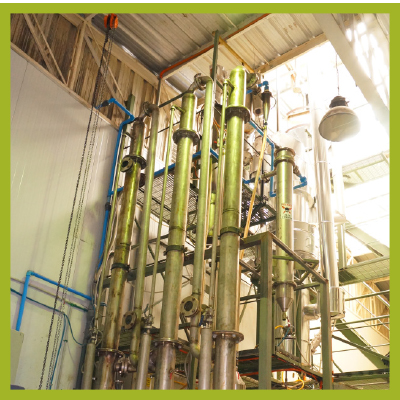 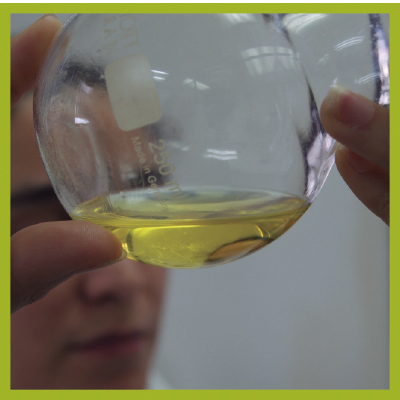 Markets are increasingly demanding chemicals based on renewable raw materials, produced responsibly, with low energy requirements and minimal environmental impact. In this sense, use of aromatic compounds is often questioned, because they are derived from oil (and to a lesser extent from coal), their production requires large productive plants and often they have a very negative ecological footprint.

Chile has large forest resources, the plantations of Pinus radiata D. Don being the most important ones. Their processing in sawmills generates large volumes of bark, which is currently used as industrial fuel, with a very low added value. Among the components of the bark, catechins with varying degrees of condensation (tannins) can be highlighted: they represent about 30% by weight of the material. These are aromatic compounds whose monomers contain a catechol substituent group, which can be released by virtue of a thermochemical treatment.

Each monomeric unit contains a catechol group (ring B), which corresponds to approximately 37% of the mass of condensed tannins; it is estimated that on average the catechol content of pine bark can reach up to 19%, depending on bark tannin content. Therefore, pine bark represents an attractive renewable source for sustainable production of catechols, chemical products with high commercial value (USD 2.000-6.000 per ton), mainly used as antioxidant in rubber, chemical, photography, colorant, fat and oil industries, as well as in fertilizers, cosmetics and some pharmaceuticals.

The project “Obtaining aromatic compounds of commercial interest from radiata pine bark” proposes to generate catechols through fast pyrolysis of tannins. Along with optimizing the most important variables, it is necessary to avoid product degradation and condensation of secondary compounds. We evaluated technological alternatives of separation and purification, and proposed, at the end of the project, a process of production of catechols from radiata pine bark.

This project has the support of REBISA, Resinas del Bío-Bío S.A., as our partner company, and presents results in two stages: (1) Thermochemical conversion of bark tannins from Pinus radiata and (2) Fractionation of bio-oil to obtain catechols.

First, the thermochemical decomposition of tannins was evaluated using a micropyrolysis (Py) unit coupled to a gas chromatograph (GC) and mass spectrometer (MS) – a powerful tool to study fast pyrolysis of biomass and biopolymers. The residence time of vapors in the micropyrolyzer is only a few milliseconds, which minimizes secondary reactions and allows us to optimize the yield and distribution of primary pyrolysis products.

The results for bark and bark extracts showed that they contain an important percentage of procyanidin-type polyphenols (condensable tannins), interesting compounds to extract from bark. In addition, the fraction of soluble tannins (obtained by an extraction process developed at UDT) contains lower molecular weight polyphenols and a significant sugar content, while the water-insoluble tannin fraction is richer in tannins and other high-molecular-weight compounds. Therefore, the insoluble tannin fraction is the most appropriate raw material for catechol production from radiata pine bark.

Fast pyrolysis is a process in which a raw material can be subjected to relatively high temperatures for a short period, obtaining different (and optimizable) proportions of liquid (bio-oil), solid (biochar) and gaseous products.

The progress in Stage 2, was focused on a search for an effective and efficient procedure that separates and purifies catechol and methylcatechol in the bio-oil derived from insoluble tannins.

It was proposed to apply fractionation by liquid-liquid extraction with organic solvents. Solubility tests of complete bio-oil and organic (collected in the precipitator) and aqueous (collected in the condenser) fractions were performed separately: the most appropriate solvent are n-butanol (aqueoses phase) and butyl acetate (organic phase).

Based on this, recovery of catechol as a key compound for liquid-liquid extraction of bio-oil fractions was studied. The variables included were extraction temperature and sample/solvent ratio, in addition to the amount of water for the organic fraction. The evaluated response was the concentration of catechol.

The next steps in this ongoing will be to evaluate the liquid-liquid extraction of bio-oil fractions under the optimized experimental conditions, in order to define the design parameters of a liquid-liquid extraction process. In addition, a consecutive stage for purifying catechols will be studied in order to achieve a stream rich in this product.